Just as in 1950 Japan came up with the concept of “Living National Treasure” to designate persons with exceptional skills, France has implemented the label of excellence “Entreprise du Patrimoine Vivant” (Living Heritage Company) to distinguish outstanding artisans and industrialists. This label, created by the State, comprises a small club of just 1 400 companies. It has recently expanded with the arrival of the Cote d’Azur group “SJD-ORSTEEL” based in Contes in the Paillon valley. Its Director, Adrien Sfecci, received this distinction last week in Marseilles.

Industry, decoration, medical… “SJD Decolletage” has invested in state-of-the-art equipment that allows them to control the whole chain from the design office to final completion. The same approach for their other branch, “ORSTEEL”, specialized in high technology LED lighting, to clothe monuments such as cathedrals, residences, hotels etc. in light

A real honour for the Group

“We are very proud of this distinction. We are already working with other “Entreprise du Patrimoine Vivant” branded companies and it will boost us on the French high end markets, and on the International scene in the months to come.” Explains Adrien Sfecci.

For the Contois, the label did not come out of the blue. It was preceded by audits carried out on site by State representatives regarding how products are manufactured, how their end of life is anticipated with waste recycling, and how the twenty employees, some of whom have more than twenty years of service with the company, generate ORSTEEL Light’s unique know-how. This is how “SJD-Orsteel” joined the prestigious list of companies with exceptional know-how, such as Louis Vuitton, Baccarat Crystal, Limoges porcelaine etc.

The Riviera based group is in good company with these others who maintain their production activity in France, in sectors with high added value. They represent the “Made in France” spirit and know-how and are developing French economic and cultural identity. “In the next five years, we intend to be full partners in large projects, a link in the chain, and no longer the subcontractor that we were a few years ago.”

Adrien Sfecci’s ambition is shared by his father Daniel, Manager of the Group and President of the UIMM (Union of Metallurgy Industries and trades) on the Cote d’Azur and by his brother Arnaud, in charge of the conception of the lighting department. This bodes very well for the continuation of SJD-ORSTEEL’s story, that we will be sharing with you very shortly. 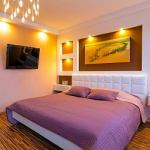